This is a trading platform for game playing services where game lovers can look for their favorite playmates for playing, or join groups that they are interested in to chat with or tip others. 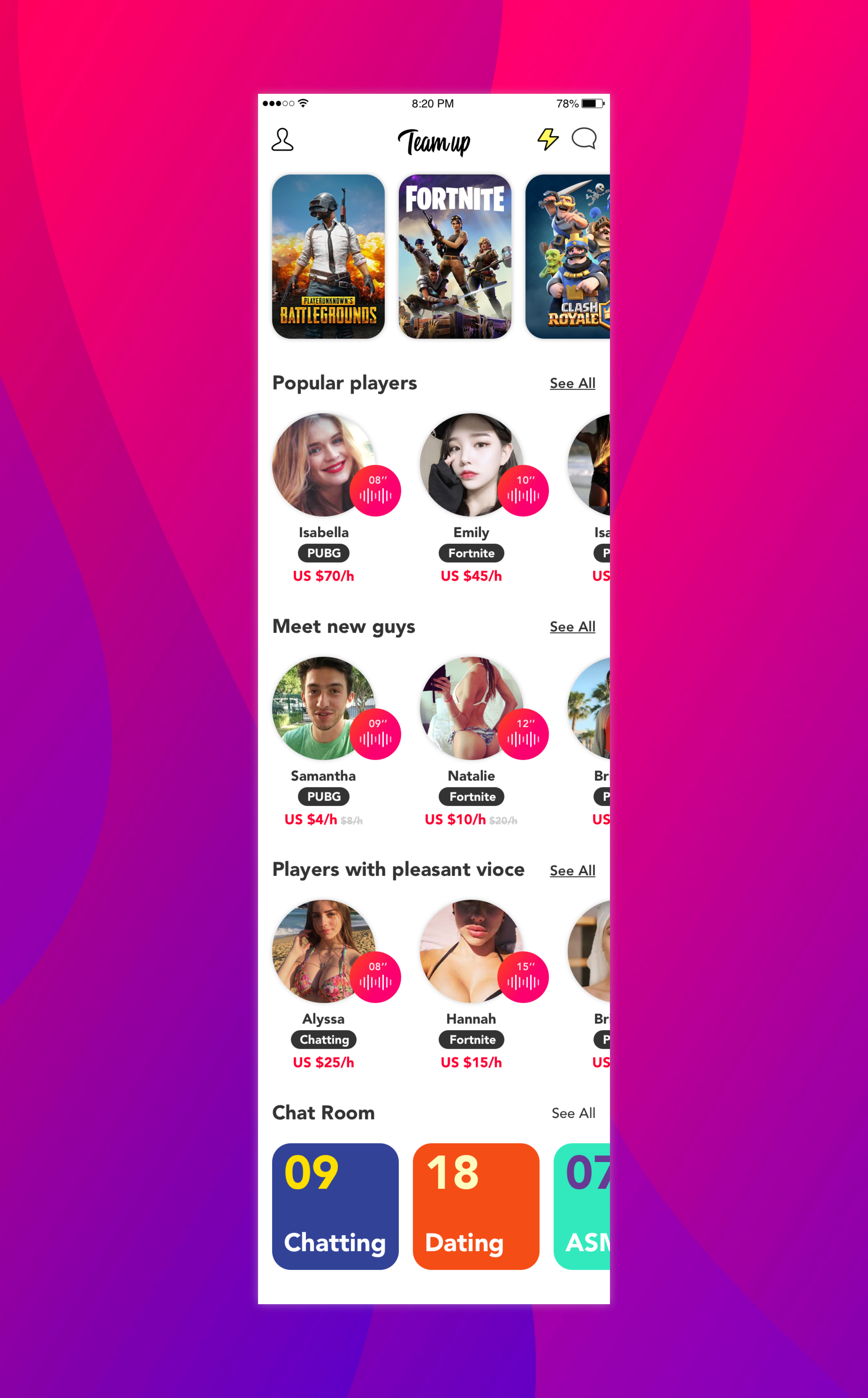 The project is a complete zero-to-one in which I played the role of product manager, interaction designer and visual designer. Because the market strategy did not determine which country to do first, the crucial thing we started with was to find the potential of game platforms in various countries.

After analyzing a vast number of reports, we noticed that the USA, transcending China, has become the largest market globally in 2019, which was followed by China, Japan, Korea, and Germany. The market size of the USA is expected to reach 36.9 billion dollars. Meanwhile, the increase in Southeast Asia, an emerging market, is also remarkable. Considering our understanding of Asians, our initial product users were North Americans as well as Southeast Asians. Also investigations and surveys we conducted in Thailand before showed that the usage habit of software of Thai people was similar to that of the Western people. As such, the costing of software development will be substantially decreased if we use the same of similar design to these two areas.

We started to research the top social, e-commerce, game, and freelancer platforms in North America. I have changed most of the commonly used mobile Apps to Instagram, Snapchat, Twitch, Tinder, etc., and made a complete arrangement of major Apps using dendrogram based on their page architecture and function points. I have to say, with the previous entrepreneurial experience, I can have a deeper understanding of all these. The biggest improvement for myself, in terms of career development, is the overall control and judgement of products. This sense of rationality can help me to better guide product design, or in other words, to be more target-oriented and less tortuous.

It’s not easy to understand the social and lifestyle habits of North Americans. This is not as simple as making a tool or an e-commerce transaction. For a social product, we must understand the social laws of target people. Furthermore, we must understand the characteristics of human nature, so that we can make the right product. I did not start with the homepage first, instead, I thought it would take more time to think about “what exactly does this product look like”. I set about the function “transaction” in which definitely the product will involve with clear scenes and processes.

The transaction process of the customer side will necessarily be line with the order taking transaction of the business side. After sorting out fund flows and processes, I promoted our engineers to complete the research and realize the rest technical ideas. Next, we improved the registration process of the customer side, and the process and web pages of game players applying for game coaches. This part involves engagement and management of our operators, so I took the back-end examination process into consideration.

Now we continue to explore the design of homepage. I thought main element was voice which users should be attracted to, so I emphasized the “voice button”. Also, as a software with dating attributes, attractiveness of avatars was necessary, then “voice” and “avatar” constituted the most basic elements of homepage. Besides, how could we organize these people’s information, should we highlight personal information of a single coach, or could we use some sort of classification? In this regard, I referenced some foreign platforms such as Amazon, Wish, Apple Store, etc., and eventually we determined to explore some classifications. The classification on their homepage involved “popular”, “latest”, “recommended by editors”, etc., meanwhile, it was easy to remind of Taobao’s “personalized recommendation”. That was a great exploration, but we did’t need to spend so much time on the early version. We continued to brainstorm in this way. As each one had his own “service” characteristics, we tried to extract tags to make classifications that users cared about. Considering new users and old, to provide a high level of game-playing experience, we recommended users “experienced excellent coaches”, while we gave new users opportunities to “exposure”. From usage scenario, some users could look for a coach under a certain game, so at the head of page, a poster-style game classification was used so that users can quickly enter target games.

Besides, “head icon” in the upper left corner is for user information, and “Lightning” button for the function to fast order which ensures that impatient or Tuhao users can find coaches immediately within 30 seconds. In the upper right corner it’s the “chat” function which users can notice new messages wherever mobile web-pages they are. We hope that “chat”, as the most important function of social networking, will allow users to connect in the first time. Also that will increase user stickiness of product. 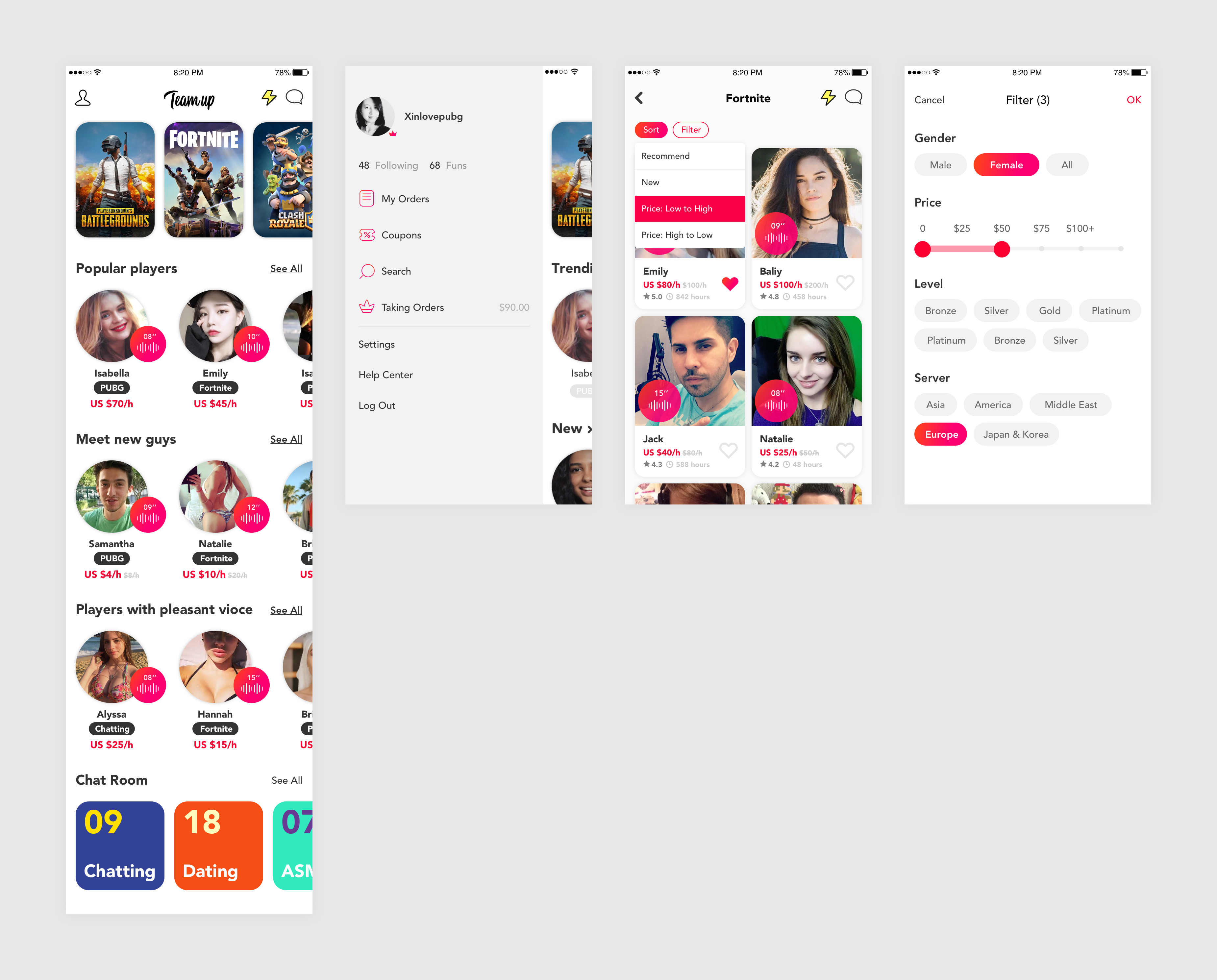 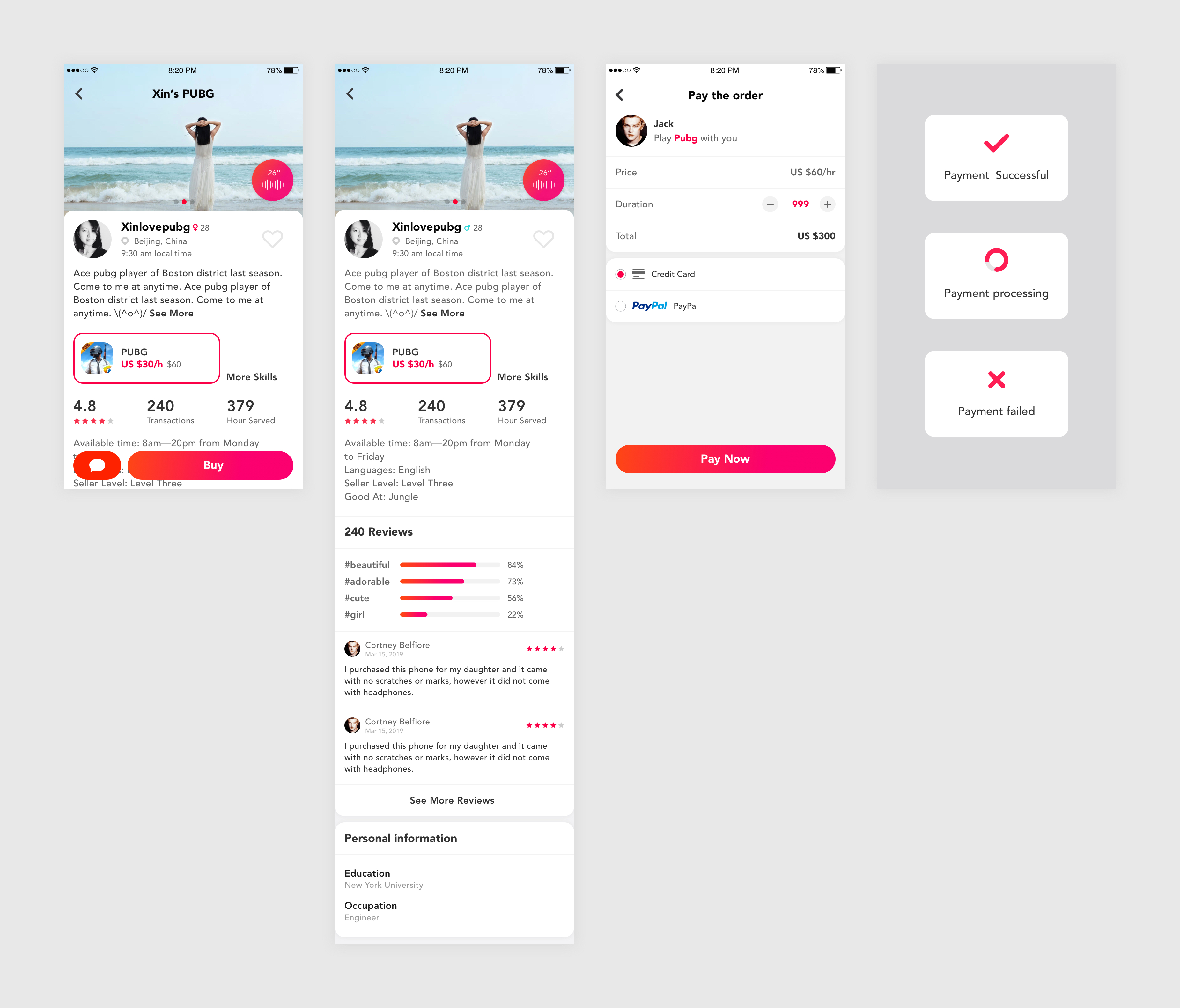 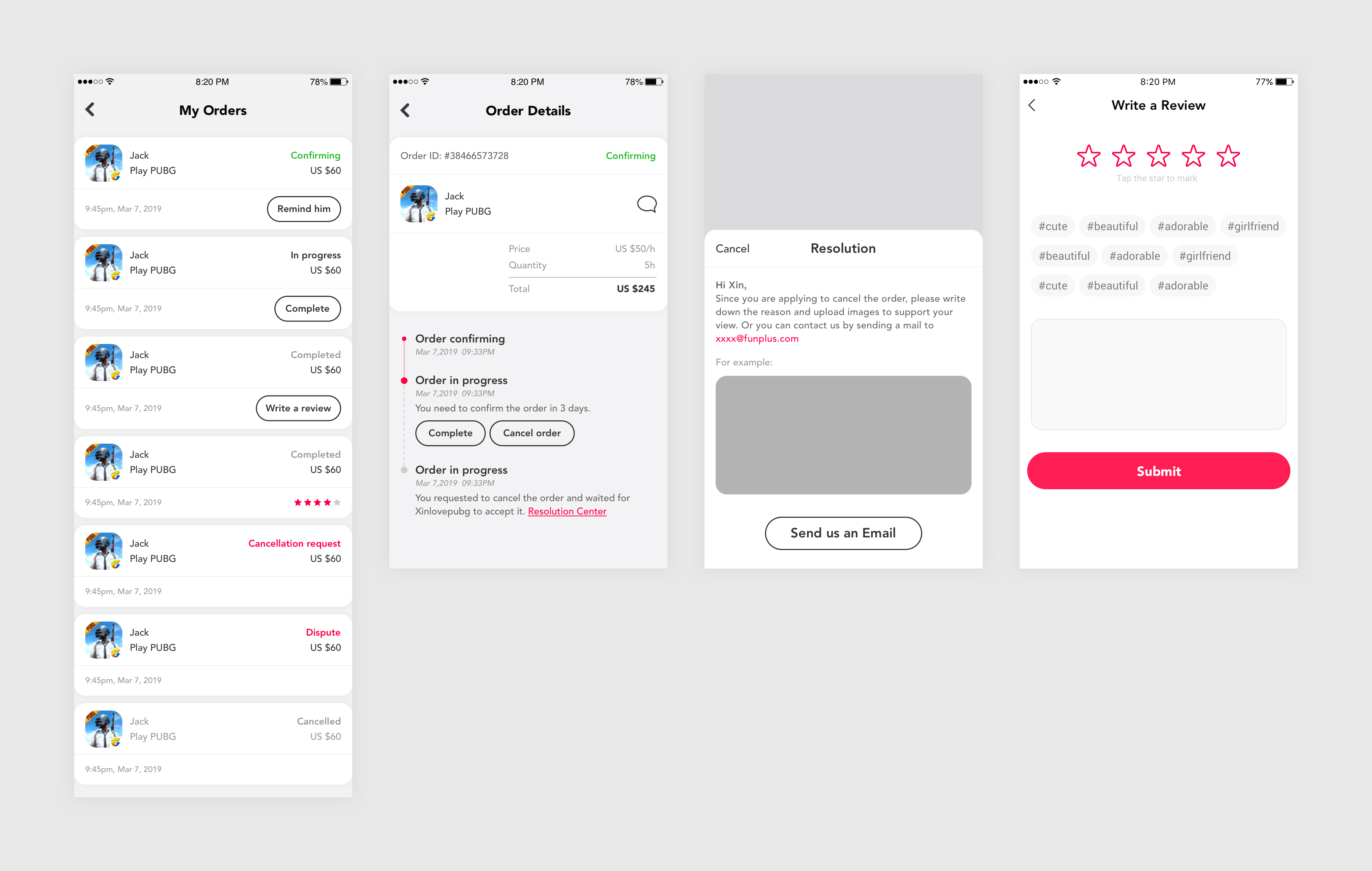 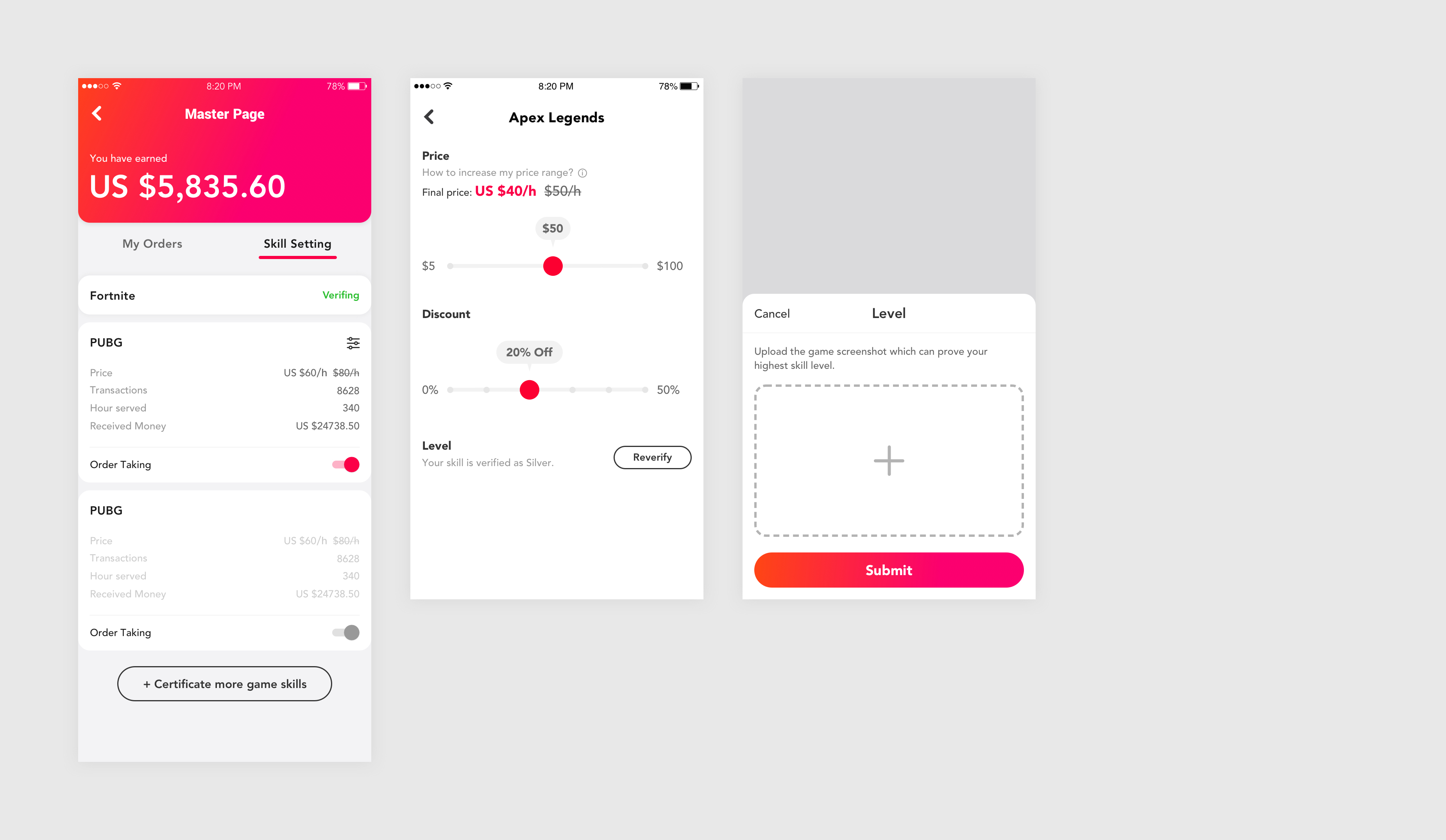 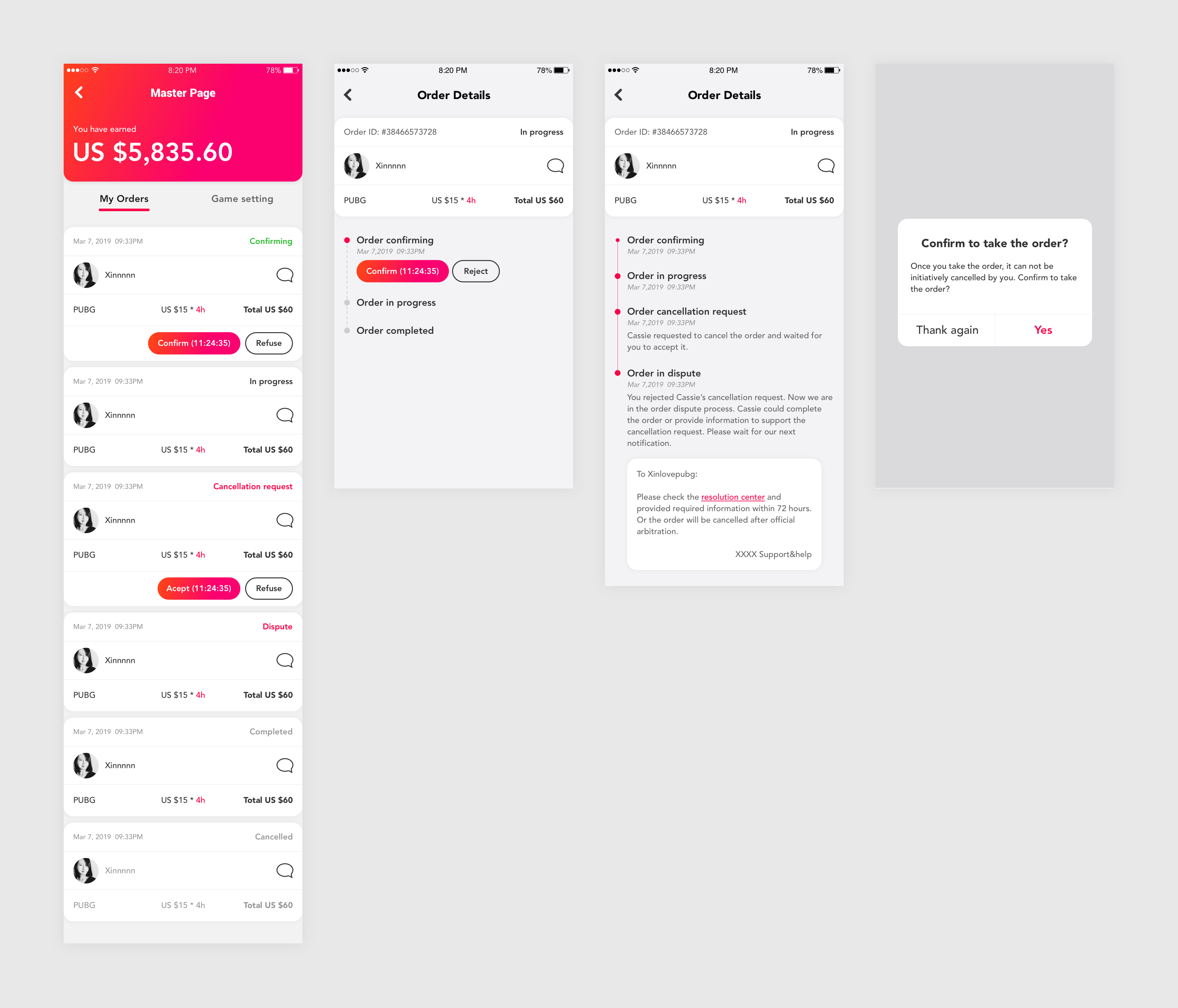 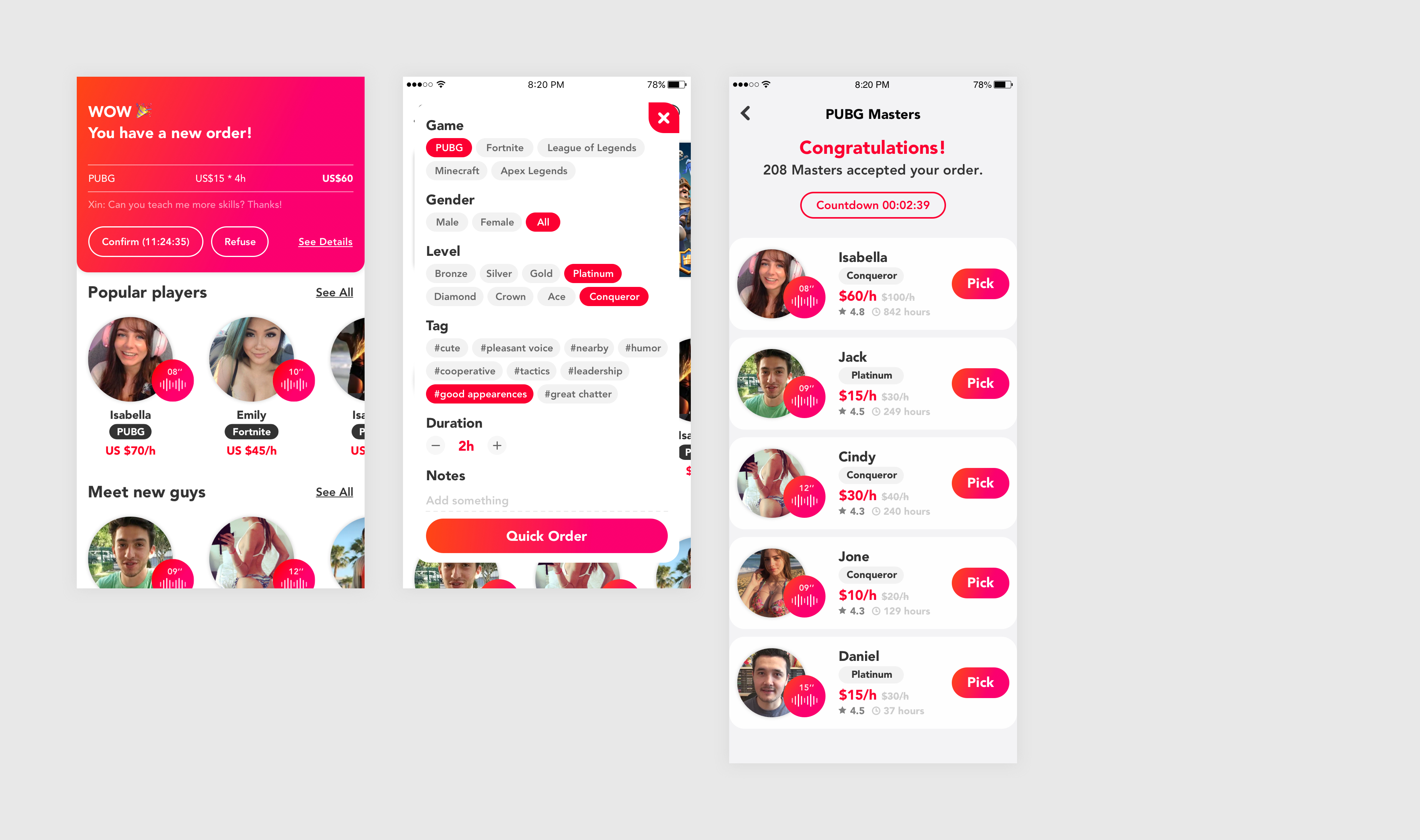 I tried several solutions of page layout, and when this version coming out, we were excited. We asked colleagues for testing, and the response was positive. But we hoped to listen to more opinions from target users and saw if there was any points for further optimization. So I did another two versions for comparative testing. On Facebook, we selected about 10 target users and potential users for interviews. The conclusion was that 80% of users preferred first solution while the evaluation was high, and even a few users expressed their desire to use our product sooner.

So far as the project proceeds, we have received and been thrilled by positive feedback of all kinds, and I believe nothing else can make me feel more fulfilled than that as a product manager. We then followed up with sorting out our visual standards and styles. Considering warm colors can make deals happen more easily, we have chosen, for the time being, Red, the color with a touch of seduction. 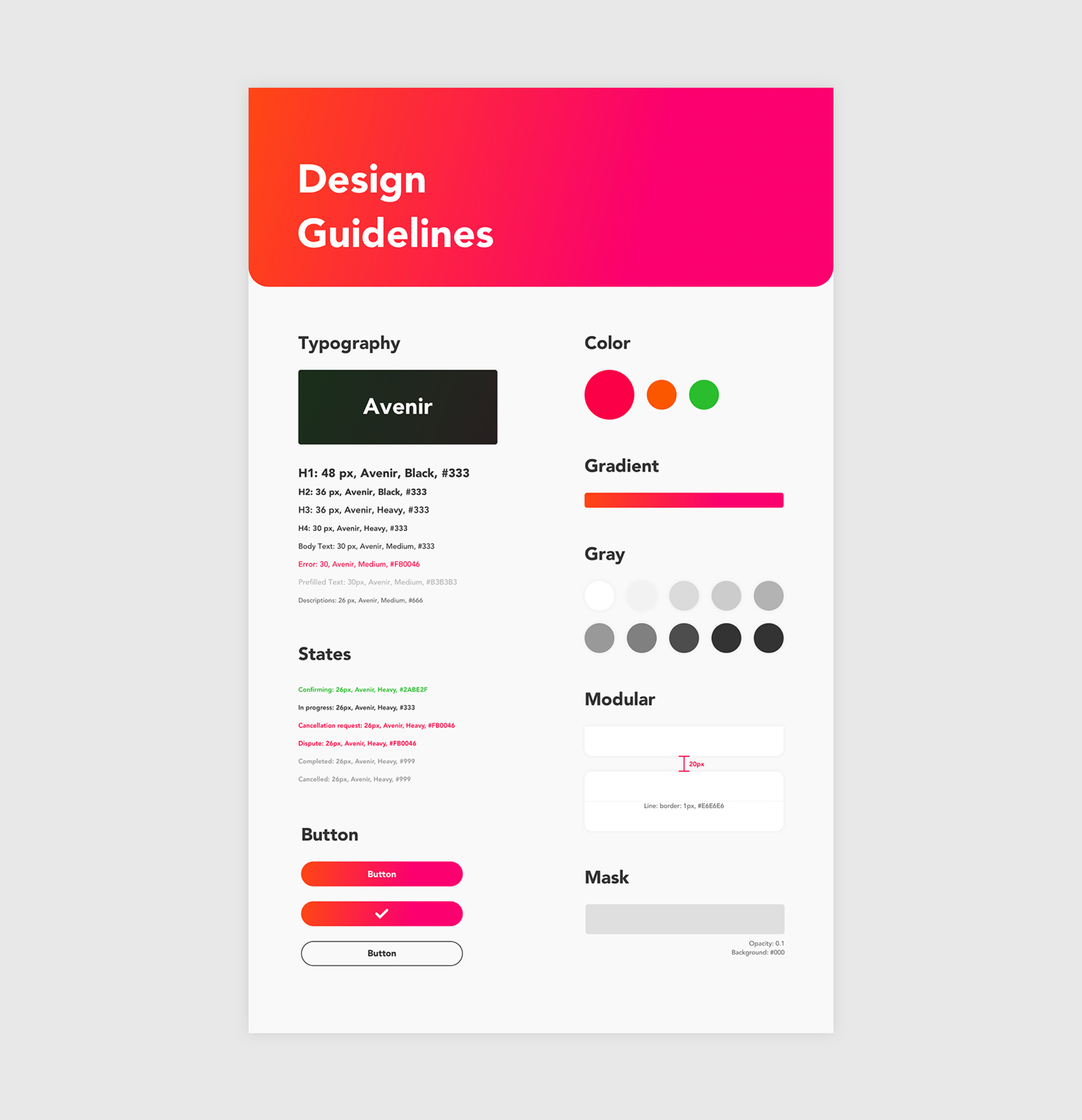